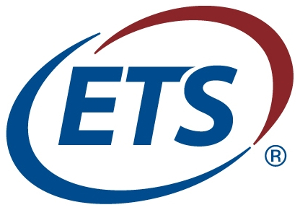 Educatonal Testing Services (ETS) is an American private nonprofit educational testing and assessment organization. ETS develops, administers and scores more than 50 million tests annually — including the TOEFL and TOEIC tests, the GRE General and Subject Tests and the Praxis Series assessments — in more than 180 countries, at more than 9,000 locations worldwide. In addition to assessments, ETS conducts educational research, analysis and policy studies and develop a variety of customized services and products for teacher certification, English language learning and elementary, secondary and post-secondary education.

The Test of English as a Foreign Language, or TOEFL (/ˈtoʊfəl/, TOH-fəl) is a standardized test to measure the English language ability of non-native speakers wishing to enroll in American universities. The test is accepted by many English-speaking academic and professional institutions. TOEFL is a trademark of the Educational Testing Service (ETS), a private non-profit organization, which designs and administers the tests. ETS issues official score reports, sent independently to institutions, for two years following the test. more…

The Test of English for International Communication (TOEIC) is “an English language test designed specifically to measure the everyday English skills of people working in an international environment.” There are different forms of the exam: The TOEIC Listening & Reading Test consists of two equally graded tests of comprehension assessment activities totaling a possible 990 score; the newer TOEIC Speaking & Writing Test comprises tests of pronunciation, vocabulary, grammar, fluency, overall coherence, and structure (organization of sentences) totaling a possible 400 score. In addition to the official TOEIC tests, there are also versions that individual businesses and educational institutions can purchase for internal use. These “Institutional” TOEIC tests can be administered at the organization’s choice of location and time for their employees or students. more…