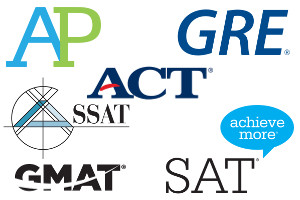 The placement examination sections below are organized by education level (high school, university, and post-graduate). Some of the testing programs listed include:

Note: This list is currently US-centric and not all tests are included here. Notably absent are the Cambridge General English and other subject series and the UK school proficiency tests. We hope to add these sections here soon.  Please contact us if you have information on other programs you would like to have included.

The Secondary School Admission Test (SSAT) is the required admission test for many of the best secondary and private or independent schools in the world and is used as an integral part of their admissions evaluation. It is designed for students in grades 3 through 11 and is administered on three levels (Elementary, Middle, and Upper). There are two types of SSAT test administrations: the Standard administration, which is given on eight designated Saturdays during the academic year at test sites around the world, and the Flex administration, which is an individual or group test administered on any date other than the eight Standard dates. more…

The Preliminary SAT/National Merit Scholarship Qualifying Test (PSAT/NMSQT) is a standardized test administered by the College Board and cosponsored by the National Merit Scholarship Corporation (NMSC) in the United States. There are three versions of the PSAT. The PSAT 8/9 is designed for high school freshman students and the PSAT 10 for sophomore students. Both can safely be considered “Practice” SAT tests. The PSAT/NMSQT is designed for high school junior students (year 11) and other than the difficulty levels is very similar to the PSAT 10 (given at different times of the year). Students that take the PSAT/NMSQT are automatically screened for the National Merit Scholarship program. more…

The ACT (/eɪ siː tiː/ ay-see-tee; originally an abbreviation of American College Testing) is a standardized college readiness for high school achievement and college admissions in the United States. Produced by ACT, Inc, the ACT has seen a gradual increase in the number of test takers since its inception, and in 2011 the ACT surpassed the SAT for the first time in total test takers. All four-year colleges and universities in the U.S. accept the ACT. The four main tests (English, Math, Reading and Science) are scored individually on a scale of 1–36. The writing test is optional. more…

The SAT, owned and published by the College Board, is a standardized test used for college admissions in the United States. It is intended to assess a student’s readiness for college. The current SAT, introduced in 2016, takes 3 hours to finish plus an additional 50 minutes if doing the optional essay. Possible scores on the SAT range from 400 to 1600, combining test results from two 800-point sections: Mathematics and Critical reading and Writing. Taking the SAT or its competitor, the ACT, is required for freshman entry to many, but not all, universities in the United States. more…

Many leading universities in the U.S. require or recommend the SAT Subject Tests. These are hour-long, content-based tests that allow students to show what they know in specific subjects areas where they excel. There are 20 SAT Subject Tests in five general subject areas: Math, History, Science, Literature and Languages. Each Subject Test is an hour long. They are all multiple-choice and scored on a 200–800 scale. Subject Tests test knowledge of subjects on a high school level. The best way to prepare is to take the relevant courses and work hard in them. more…

The College Board’s Advanced Placement Program (AP) is a rigorous academic program built on a foundation of high-quality assessments that have been adopted across the United States and around the world as a model for high standards. Today, the AP Program encompasses 1.8 million students and over 145,000 teachers across all 50 states and more than 120 countries. Participation in AP provides students with the opportunity to take a college-level courses at their high school and to earn advanced placement and/or credit in college by obtaining a qualifying score on the AP Exam. More than 90 percent of four-year colleges and universities in the United States grant students credit, placement or both on the basis of successful AP Exam scores. Universities in more than 60 countries recognize AP Exam scores in the admission process and/or award credit and placement for qualifying scores. more…

The Graduate Management Admission Test (GMAT (/ˈdʒiːmæt/ (JEE-mat))) is a computer adaptive test (CAT) intended to assess certain analytical, writing, quantitative, verbal, and reading skills in written English. It is used by most graduate management programs as the basis for admission. It requires knowledge of certain grammar and knowledge of certain algebra, geometry, and arithmetic. The GMAT does not measure business knowledge or skill, nor does it measure intelligence. According to the test owning company, the Graduate Management Admission Council (GMAC), the GMAT assesses analytical writing and problem-solving abilities, while also addressing data sufficiency, logic, and critical reasoning skills that it believes to be vital to real-world business and management success. It can be taken up to five times a year. more…