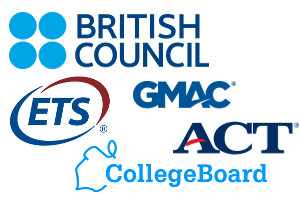 Many organizations around the world specialize in standard testing. This section is initially only focused on organizations testing for English and school placement.  This will be expanded to include other areas in the not too distant future.

International testing organizations listed below include:

The British Council is a British organization specialising in international educational and cultural opportunities. There are 70 British Council Teaching Centres in 53 countries. 1,189,000 class hours were taught to 300,000 learners in 2006/07. It claims to be “the world’s largest English-language teaching organization”. In its examination centres, the British Council administers 1.5 million UK examinations to over one million candidates each year. It is also working with the UK’s award bodies to extend the range of professional qualifications available overseas. The Council oversees British schools operating internationally through bodies such as COBIS, NABSS, and the European Council of International Schools. The British Council helps to run the global IELTS English test and other English language testing on behalf of partner organizations. more…

Cambridge English Language Assessment (formerly Cambridge ESOL) is part of the University of Cambridge and provides an almost dizzying collection of examinations. They were the driving force behind the establishment of the CEFR with all of their examinations (and most training materials) now aligned with the CEFR. Some of the more popular exams in this series are identified separately in this list (IELTS, BEC, BULATS, CELTA). Other popular exams include the General English series (KET, PET, FCE, CAE and CPE) and the Young Learners series (Starters, Movers, Flyers). more…

Educational Testing Services (ETS) is an American private nonprofit educational testing and assessment organization. ETS develops, administers and scores more than 50 million tests annually — including the TOEFL and TOEIC tests, the GRE General and Subject Tests and The Praxis Series assessments — in more than 180 countries, at more than 9,000 locations worldwide. In addition to assessments, they conduct educational research, analysis and policy studies and develop a variety of customized services and products for teacher certification, English language learning and elementary, secondary and post-secondary education. more…

College Board is an American private nonprofit corporation formed in 1899 to expand access to higher education. College Board is not an association of colleges, however it runs a membership association of institutions, including over 6,000 schools, colleges, universities and other educational organizations. College Board develops and administers several standardized tests including the SAT, PSAT, SAT Subject Tests and Advanced Placement tests. It also develops curricula used by K-12 and post-secondary education institutions to promote college-readiness and as part of the college admissions process.

ACT, Incorporated is the company that provides the ACT test. From the ACT website: “Most people know us for the ACT test, but that’s just one aspect of our work. It’s a fact that more than 1.8 million graduates have taken the ACT® each year—making us the leading US college admissions testing company. We also serve millions of job seekers, businesses, government agencies, and policymakers around the world.” more…

The Graduate Management Admission Council (GMAC) is an international non-profit organization of business schools that provides products and services to academic institutions and prospective graduate management education students. The organization owns the Graduate Management Admission Test (GMAT), a standardized assessment that is widely used by graduate business administration programs to measure quantitative, verbal, analytical and integrated reasoning skills in applicants. GMAC also provides survey research and market analysis aimed at helping graduate management admissions professionals make informed decisions, and serves as an information source for journalists and members of the public interested in information about management education and the role it plays in the global economy. more…

Trinity College London is an international exam board providing qualifications across a spectrum of communicative skills — from music, drama and arts activities to English language — at all levels. The Trinity Certificate in Teaching English to Speakers of Other Languages (CertTESOL) is a TESOL or TEFL (Teaching English as a Foreign Language) certificate designed for those with little or no experience of teaching English. It equips candidates with the basic skills and knowledge needed to take up a first post as an ESOL teacher. It gives an introduction to the theory and practice of English teaching and an insight into the challenges facing the learner and the role of the teacher. Trinity also provides other TESOL training and accreditation including the Trinity Diploma in TESOL (DipTESOL) and the Fellowship Diploma in TESOL Education Studies (FTCL TESOL). more…